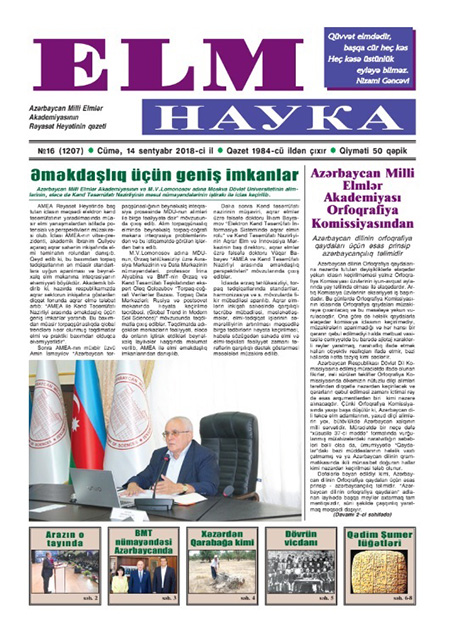 Next edition of "Elm" newspaper, press organization of the Presidium of Azerbaijan National Academy of Sciences, has been published on September 14, 2018
The newspaper reflected materials about the meeting of Officials of ANAS, scientists of the Moscow State University after M.V.Lomonosov and the Ministry of Agriculture, Declaration of the Commission on Spelling ANAS, event in devoted to the 70th anniversary of the Tabriz University, the first meeting of the autumn session of the scientific and educational committee of Milli Majlis, Trip of Vice-President of ANAS, academician Isa Habibbeyli to Mongolia, meeting with director of UN Aging Institute in ANAS, International conference on the topic "Nakhchivan: the capital of Islamic culture", visit to the Institute of the History of Science by the director of the St. Petersburg branch of the Institute of the History of Technology and Natural Sciences after S.I.Vavilov of the Russian Academy of Sciences, PhD in Sociology Nadejda Asheulova, Seid Nigar's research on the Karabagh Divan, and etc.
Also in the newspaper were published articles: "High score", "The compatriot, who opened the door of science", "From the Caspian Sea to Karabakh", "The conscience of the era", "Ancient Sumerian dictionaries", "The scientist who discovered new ways", "Meeting with the ambassador of the island Freedom", "Improving the speed of control", "Caspian Convention: horizons of scientific cooperation" and and others.