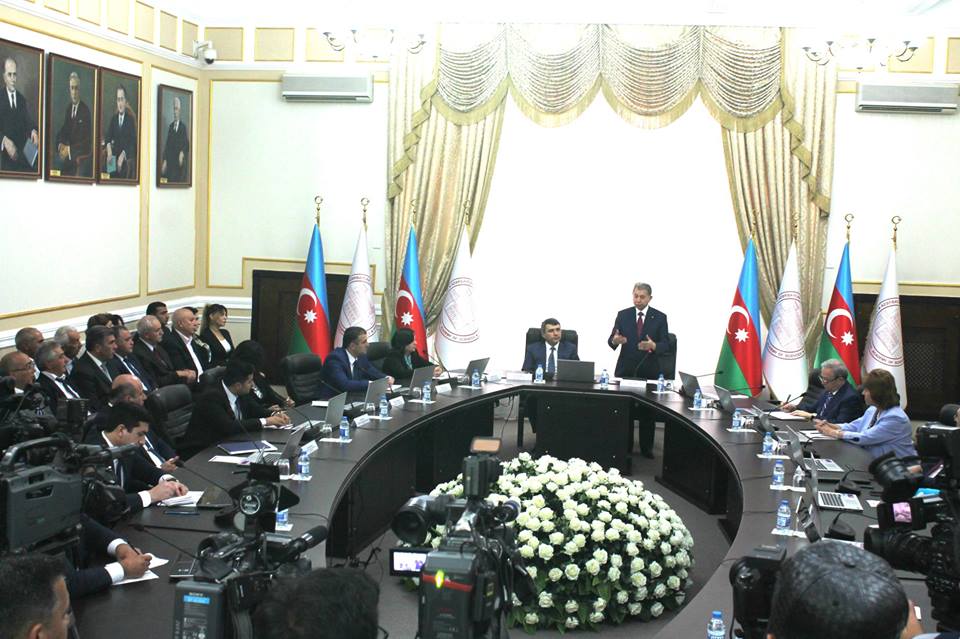 ANAS and the Ministry of Agriculture signed the Agreement of Intentions
27.09.2018

Presidium of the Azerbaijan National Academy of Sciences hosted a ceremony of signing an agreement on intentions between ANAS and the Ministry of Agriculture, aimed at fruitful cooperation in the future on September 27.

Opening the event, the President of ANAS, academician Akif Alizadeh spoke about the importance of cooperation with the Ministry of Agriculture. Academician noted that, this agreement will make a significant contribution to solving urgent problems in the sphere of applying innovations and scientific achievements in agriculture and forming highly specialized personnel potential. Stressing that, joint innovative projects will be implemented, the head of ANAS said that all possible conditions for the use of production opportunities will be created in scientific research institutes for this purpose. In addition, opportunities will be explored for creating joint model farms in pilot sections of ANAS and Ministry of Agriculture.

Then, Minister of Agriculture Inam Kerimov said that, as a result of the great attention that the head of state has been giving to the development of the non-oil sector in Azerbaijan in recent years, a new stage in the development of the agrarian sector, which is one of the leading fields of the economy, has begun. The minister added that the primary analysis of reforms in the agrarian sector shows that in order to achieve sustainable development in this area, it is necessary to formulate a strategy based on scientific achievements and serving the interests of farmers and peasants.

Having said that it is important to increase the competitiveness of agricultural production, the minister stressed that for this it is necessary to establish cooperation aimed at achieving common goals. Inam Kerimov noted that, he therefore attaches great importance to the Agreement of Intent to be signed today.

Further, in his speech the academician-secretary of the Department of Biological and Medical Sciences of ANAS, academician Ahliman Amiraslanov noted that the signing of the Agreement of Intentions will contribute to achieving great success in the relevant field. The academician said that the organization of agrarian science together with ANAS in the agricultural system will help expand scientific research activities. He added that, along with scientific research, the research institutions of both organizations will be able to realize the scientific results obtained in practice, which will lead to significant achievements in subsequent years.

Then, academician-secretary of ANAS, academician Rasim Aliguliyev spoke, who called today's event a significant event in the agrarian life of the country. The academician noted that as a result of reforms implemented in ANAS over the past five years, not only local but also foreign organizations express their great interest in cooperation with the Academy. The Academic Secretary stressed that the initiative of cooperation is one of the priorities defined at the General Meeting of ANAS last year. The scientist also said that at present the task of the electronicization of agriculture is urgent, for the implementation of which it is necessary to implement activities aimed at applying agroinformational technologies, to involve not only business organizations, but also scientific institutions, to create a database, to develop human resources and develop related projects. Academician Rasim Aliguliyev proposed to establish the Institute of Agroinformatics under the Ministry of Agriculture. Having said that there are very few specialists in this sphere, the academician added that in this case ANAS can render support to the ministry. In addition, in order to achieve food security in the country, the academician put forward a proposal to establish close ties between the regional scientific departments and centers of ANAS and the relevant organizations of Ministry of Agriculture operating in the regions. He expressed his confidence that joint reforms in this field will lead to positive results.

Further, Vugar Babayev, General Director of the Center for Agrarian Science and Innovations of the Ministry of Agriculture, PhD in Agrarian Sciences, noted that, the Agreement of Intentions will contribute to strengthening cooperation between the parties, reconstructing the links between agrarian science and production to create innovative farms based on scientific achievements, conducting applied scientific research in accordance with the requirements of a market economy. Vugar Babayev emphasized that, as a result of this cooperation priorities of activities related to the education of economic entities and assistance to the development of their activities will be determined.

Also, at the event director of the Research Institute of Agriculture Javanshir Talayi, correspondent members of ANAS Bilal Bilalov and Amin Ismailov noted that, the Agreement of Intent is a successful step aimed at implementing joint activities and expressed their confidence that it would lead to an even greater expansion of cooperation.

In conclusion, an agreement on intentions was signed between ANAS and the Ministry of Agriculture. The document reflected such issues as planning activities related to relevant tasks, organization of agrarian science and implementation of joint multidisciplinary research, technology transfer aimed at training and applying innovations, implementing projects and programs, organizing republican and international competitions for receiving grants, etc.

The agreement was signed by the President of ANAS, academician Akif Alizadeh and Minister of Agriculture Inam Kerimov.

In conclusion, an agreement on intentions was signed between ANAS and the Ministry of Agriculture. The document reflected such issues as planning activities related to relevant tasks, organization of agrarian science and implementation of joint multidisciplinary research, technology transfer aimed at training and applying innovations, implementing projects and programs, organizing republican and international competitions for receiving grants, etc.

The agreement was signed by ANAS President, academician Akif Alizadeh and Minister of Agriculture Inam Kerimov.