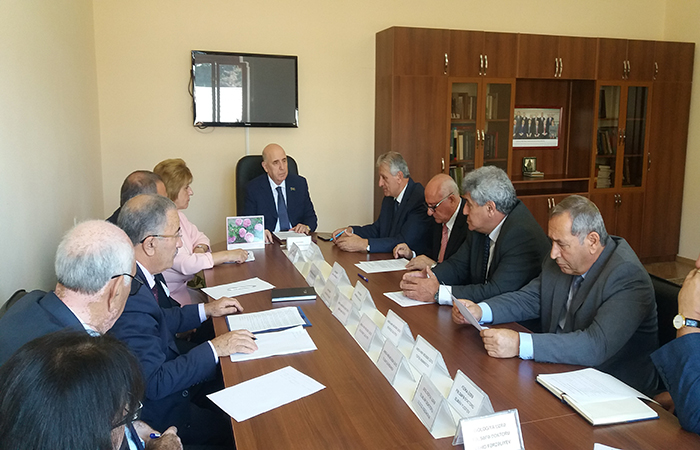 On October 11, the next Bureau meeting of the Division of Biological and Medical Sciences of ANAS was held.

The event was attended by the vice-president of ANAS, academician Irada Huseynova, academic secretary of the Division, academician Ahliman Amiraslanov, Director of the High Technologies Park of ANAS, PhD in Earth Sciences, associate professor Samir Mammadov and heads of scientific institutions included into Division.

Then, in order to fulfill the order of the President of ANAS of September 24, 2019 “On some measures for the more efficient use of patents owned by scientific institutions and organizations of ANAS” was discussed the correspondence of research plans between the scientific institutions of the HT Park and the Division of Biological and Medical Sciences, applied measures to the real needs of the country's economy.

During the meeting, the approval of the working group on the “Taxonomic spectrum of the fauna of Azerbaijan (vertebrates)” was also discussed. A.Amiraslanov recalled the meeting of the Department of Biological and Medical Sciences held on October 8, which operates within the structure of the Terminology Commission under the Cabinet of Ministers of the Republic of Azerbaijan, and brought to the attention the expediency of creating a working group.

The event also provided information on the 60th anniversary of the Director of the Institute of Zoology, PhD in Physics, Associate Professor Elman Yusifov. It was decided to award the scientist with the Certificate of Honor of the Division of Biological and Medical Sciences.

At the meeting, appropriate decisions were made on a number of personnel issues.

In conclusion, academician Ahliman Amiraslanov instructed to prepare reports of scientific institutions and organizations of the Division for 2019.