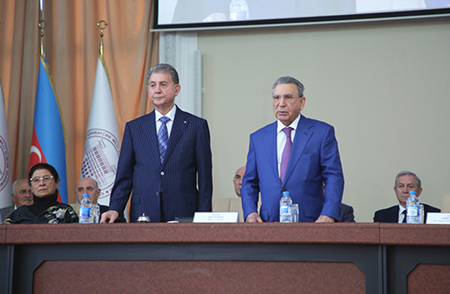 Today General meeting of ANAS was held at the Presidium of ANAS. The meeting was attended by the Head of the Department of Humanitarian Policy of the Presidential Administration, Professor Farah Aliyeva, active and corresponding members of ANAS, including directors of scientific institutions and organizations of the Academy.

Opening the event, academician Akif Alizadeh delivered a lecture on the activities, achievements and research in the priority areas of the Academy during the six years of his tenure as president of ANAS. According to the scientist, in recent years, ANAS carried out significant work on the development of scientific and technical potential, conducting multidisciplinary researches, expanding international scientific relations, training of highly qualified personnel, and directing scientific achievements to solve socio-economic problems of the country.

Academician Akif Alizadeh noted that the main achievements of the Academy in recent years are the organization of postgraduate education at the Azerbaijan National Academy of Sciences, the creation of High Technology Park, and the publication of numerous articles by Azerbaijani scientists in authoritative international journals.

Then A. Alizadeh nominated academician Ramiz Mehdiyev for presidency of ANAS.

Academicians Yaqub Mahmudov, Isa Habibbayli, Urkhan Alekperov, Naila Valikhanli, Telman Aliyev and Adil Garibov supported the candidacy of R. Mehdiyev. The scientist noted that for many years, his multidisciplinary and multi-faceted work has made valuable contributions to our science, and has provided invaluable services in promoting the truth of Azerbaijan around the world.

Then the Accounts Commission was established to hold the voting for the post of the President of ANAS. Academician Urkhan Alekperov was appointed chairman of the commission, academicians Vagif Farzaliyev, Mohsun Naghisoylu, Naila Valikhanli and Akpar Feyzullayev.

Then a secret ballot was held. 55 members of ANAS participated in the voting.

According to the results of the voting, Ramiz Mehdiyev, who is an alternative nominee, was unanimously elected president of ANAS.

It should be noted that for the first time in the history of the Academy, the president is elected from the humanities and social sciences.

Speaking at the event, the new president of ANAS academician Ramiz Mehdiyev expressed his deep gratitude to the President of the Republic of Azerbaijan Ilham Aliyev for his awarding the "Heydar Aliyev" order.

R.Mehdiyev urged the scientists of ANAS to work more diligently and responsibly in their activities and to further perform their duties properly. Academician Ramiz Mehdiyev thanked the ANAS members who participated in the elections.

Finally, academician Akif Alizadeh expressed his confidence that R.Mehdiyev will mobilize many years of experience and opportunities in the development of Azerbaijan's science, international integration as well as multidisciplinary research that meets the requirements of world science.