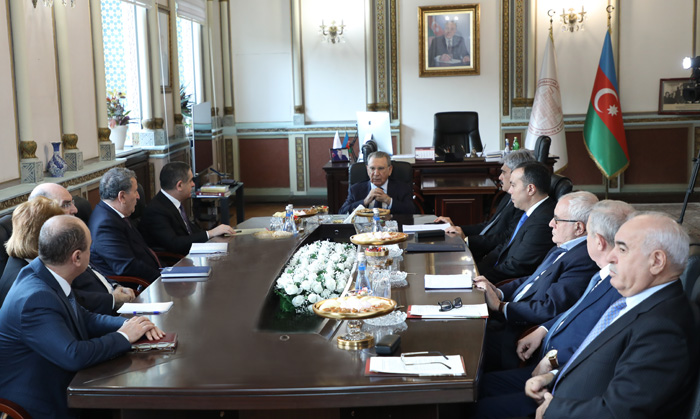 Presidium of ANAS hosted for a meeting with a number of government officials
03.02.2020

Presidium of ANAS hosted for a meeting with the Assistant to the President of the Republic of Azerbaijan on Economic Reforms Natig Amirov, Minister of Finance Samir Sharifov, Minister of Labor and Social Protection of the Population Sahil Babayev.

The event, bringing together members of the Presidium, was opened by ANAS President academician Ramiz Mehdiyev who greeted government officials and provided information about the reforms, structural changes, reconstruction works carried out at the academy, as well as about work to be done in the future. The head of ANAS spoke about the implementation of state programs, fulfillment done to implement the recommendations and instructions of the President of the Republic of Azerbaijan Ilham Aliyev. Academician Ramiz Mehdiyev expressed confidence that the tasks and duties assigned by the head of state to the ANAS employees will be carried out with high efficiency.

Then a wide exchange of views took place on further improving and optimizing the activities of the Presidium of ANAS and research institutes. In discussions were attended first vice-presidents of ANAS - academicians Isa Habibbayli and Ibrahim Guliyev, vice-presidents - academicians Dilgam Tagiyev, Irada Huseynova, Rasim Alguliyev, academician-secretary of ANAS corresponding member of the Aminagha Sadigov and head of the Office of Affairs professor Elton Mammadov.

Natig Amirov, Assistant to the President of the Republic of Azerbaijan on Economic Reforms, emphasizing the importance of research work carried out in Azerbaijan, spoke about the role of ANAS scientists in the country's socio-economic development and noted the importance of close participation of domestic scientists in issues important to the state. Minister of Finance Samir Sharifov, Minister of Labor and Social Protection Sahil Babayev also shared their views on the proposals and recommendations of members of the Presidium of ANAS.

Government officials expressed confidence that ANAS Development Program for 2020–2025, adopted at the Academy’s General Meeting on December 29, 2019, would make a significant contribution to the development of this institution, as well as domestic science.