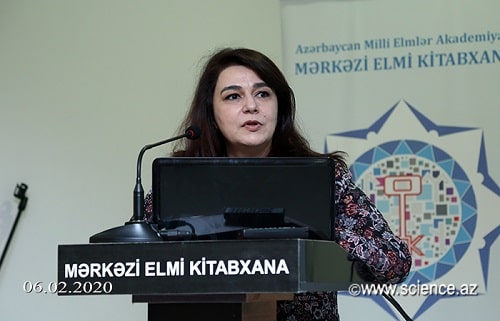 On February 6, an information seminar on the activities of the COST (European Cooperation in Science and Technology) program of the European Commission was held at the Central Scientific Library with the organization of the Office of International Relations of the Presidium of ANAS.

Opening the seminar, head of the Office of International Relations, Ph.D. in Biology Esmira Alirzayeva, delivered a lecture on topic “The State of International Cooperation in Science: Achievements and Challenges”. Speaking about the representation of Azerbaijan in many mega-projects, E. Alirzayeva noted that there is currently close cooperation between ANAS and Bulgarian Academy of Sciences, Chinese Academy of Social Sciences, Italian National Research Council (CNR), Council for Scientific and Technical Research of Turkey (TÜBİTAK), Belarusian State Committee for Science and Technology, Russian Foundation for Basic Research and other organizations.

She added that COST, Horizon 2020, and other similar programs provide excellent opportunities for domestic scientists to integrate into world science. Having demonstrated the publication activity of Azerbaijani scientists in the scientometric database “Web of Science” for 2014-2018, office head noted that there is growth in this direction. Touching upon existing problems, such as language, inexperience, and so on, E. Alirzayeva said that such factors impede the participation of young scientists in international projects.

Then she informed the participants about the seminars organized by the Office of International Relations in scientific institutions and organizations of ANAS, as well as in universities of the republic.

Later on, representative of the COST association, Judith Litens made a presentation on the financial capabilities of the organization. He said the organization, which has been operating since 1971, has opened up opportunities for scientists to conduct innovative research. Announcing the acceptance of proposals by scientists in the areas of COST research, J. Litens noted that the financing of projects is based on a four-year grant. He also announced the rules for participation in projects and preparation of applications.

Then the reports “The Importance of Network Cooperation for Azerbaijani Researchers and the Role of COST”, “COST Activities: Prospects of Azerbaijani Participants”, “European Cooperation in Science and Technology as a Step to International Relations” were listened.

In conclusion, discussions on the presentations were carried out and questions were responded.