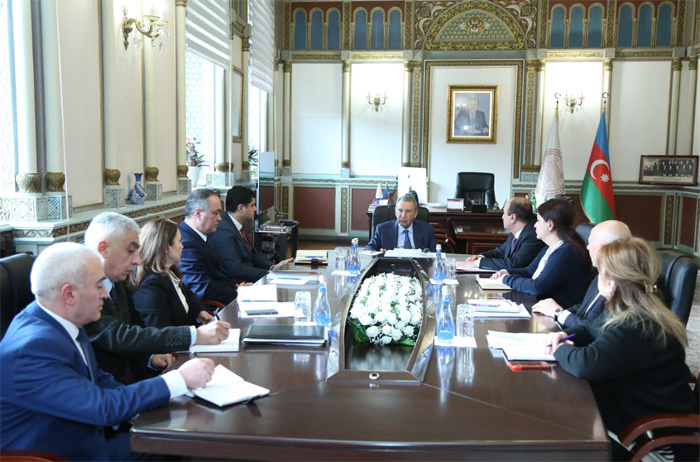 A new structure of the apparatus of the Presidium of ANAS was approved, as part of large-scale structural reforms carried out by the President of ANAS, academician Ramiz Mehdiyev.

The President of ANAS, academician Ramiz Mehdiyev received the heads of structural units of the apparatus of the Presidium of ANAS.

Highly appreciating the reforms carried out by the country's leadership, Academician Ramiz Mehdiyev spoke about the tasks assigned to the Academy in this area and the results of structural reforms that have been carried out in the Presidium of ANAS over the past months. The academician noted that with their fruitful activities and scientific research ANAS scientists should make their contribution to the implementation of creative work in the republic, ANAS should pay special attention to the implementation of innovative projects. Noting that structural reforms will be successfully carried out after that, academician Ramiz Mehdiyev spoke about the tasks facing the departments and offices of the ANAS Presidium, and their significance. Congratulating the heads of structural divisions, head of the academy wished the staff of the apparatus success at the new stage and gave them corresponding instructions.

In his speech, ANAS academician-secretary, ANAS corresponding member Aminaga Sadigov expressed confidence that the departments and offices will carry out their activities in accordance with the calls of the new stage. Aminaga Sadigov noted that all necessary measures will be implemented aimed at further improving the work of structural units.

On behalf of the heads of departments and divisions, head of the Science and Education Office, Ph.D. in Economics, Fail Kazimov, spoke. He expressed deep gratitude to the president of ANAS, academician Ramiz Mehdiyev for the confidence placed in him. Fail Kazimov noted that at the new stage of development of ANAS, the Academy staff will carry out their activities with even greater impact and carry out all the instructions of the leadership with high professionalism.