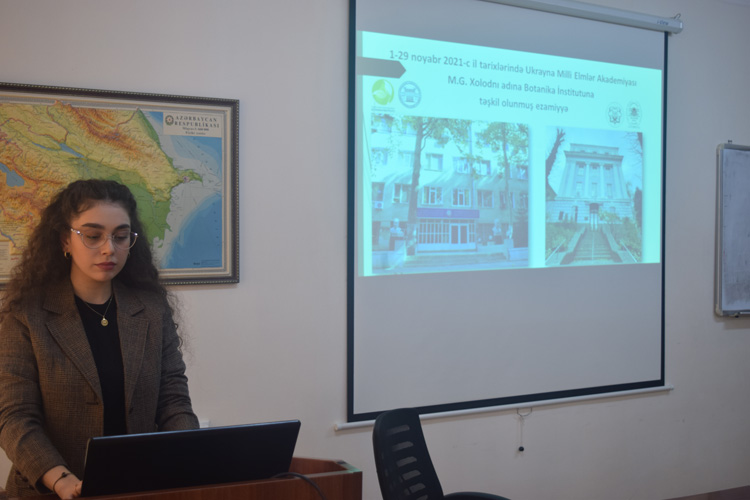 A scientific seminar was held at the Institute of Botany
26.01.2022

A scientific seminar was held at the Institute of Botany of ANAS with the presentation of Ayten Khanbutayeva, a researcher of the Laboratory of Algology and Lichenobriology, and Aytaj Alimammadova, a junior researcher of the Department of Mycology. Lectures of young doctoral students on the results of their trips abroad were heard at the seminar.

A.Khanbutayeva made speech on “Research of algae by various methods”. She gave detailed information about the methods of calculating the biomass of algae through the periphyton frame, modern methods such as optical microscopy and the advantages of their use during the research conducted by the Laboratory of Hydrobiology of the Azov-Black Sea branch of the Russian Scientific Research Institute.

A.Alimammadova made a speech on “Study of the biological properties of some medically important macromycetes”. She studied the biological properties (amount of exopolysaccharides, endopolysaccharides, total phenolic compounds, antibacterial activity and mycelial growth rates) of fungi of medicinal and nutritional importance using new methods in the Department of Mycology of the Institute of Botany named after M.G. Kholodny, Ukrainian National Academy of Sciences. After the speeches, discussions were held on the topics and the questions of the participants were answered.