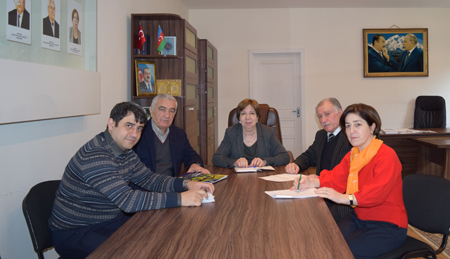 Azerbaijani scientist was a guest of the Institute of Botany of ANAS
28.01.2019

Academician Valida Alizade, Director of the Institute of Botany of ANAS, Dr. Eldar Novruzov, Director Deputy on General Affairs, ANAS professor Dilzara Agayeva, Head of the Laboratory of Mycology and Dr. Rashad Salimov, Head of the Department of Systematics and Biodiversity gave broad information about the up-to-date scientific research, international relationships, held events of the Institute and invited him to participate in the scientific activity as well as joint projects of the Institute. The restoration of the activity of “Society of Azerbaijan Botanists” public union, targets set forward, the involvement of compatriots living abroad to the activity of the union and works to be jointly carried out were also discussed.

Following the acquaintance with the herbarium and laboratories of the Institute of Botany V. Hatamov highly appreciated the implemented works and stressed that there are great opportunities for mutual collaboration and exchange of experience.