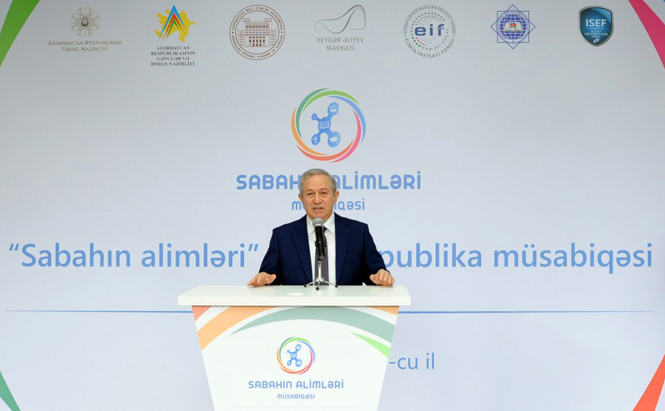 The opening ceremony of the 8th republican competition "Scientists of Tomorrow" was held on February 12.

Deputy Minister of Education Mahabbat Valiyeva spoke about the reforms carried out in the field of education by the head of the country. She noted that the applied curriculums were aimed at the preparation of young.

Deputy Minister of Youth and Sports Farhad Hajiyev, vice-president of ANAS, academician Dilgam Tagiyev, executive director of the Science Development Fund under the President of the Republic of Azerbaijan Elchin Babayev, director of the Heydar Aliyev Center Mahabbat Mehdiyeva and others spoke about the achievements of science policy and stressed the importance of the competition in terms of revealing talents, talents and potential of the youth.

It should be noted that the contest held since 2012 is being organized by the Ministry of Education, the Ministry of Youth and Sports, the National Academy of Sciences, the Heydar Aliyev Center, the Science Development Fund under the President of the Republic of Azerbaijan and the Republican Committee of Free Trade Unions of Azerbaijan. The interest in the contest is growing year by year. Totally, 1187 pupils participated in the final stage of the competition, 529 of them were awarded various awards.

The competition is held on mathematics, physics, chemistry, biology, medicine and health, ecology, engineering and computer science. The winners are awarded prizes, diplomas, medals and presents by the organizers. Winners of the best projects will participate in the Intel ISEF Fair, where more than 1800 pupils from 75 countries of the world are present every year.

The VIII Republican Competition "Scientists of Tomorrow" will end on February 14.