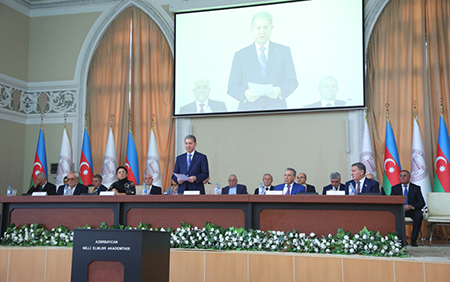 The General Meeting of the Azerbaijan National Academy of Sciences was held
24.10.2019

The General Meeting of the Azerbaijan National Academy of Sciences was held on October 23.

The event was attended by the Head of the Department of Humanitarian Policy of the Presidential Administration Professor Farah Aliyeva, active and corresponding members of ANAS, including directors of scientific institutions and organizations of the Academy.

Then the elections for the post of President of ANAS were held by secret ballot. The Audit Commission has been set up for the vote, chaired by academician Urkhan Alakbarov, academics - Vagif Farzaliyev, Mohsun Nagisoylu, Naila Valikhanli and  Akpar Feyzullayev.

U.Alakbarov stated that, 55 individuals have voted in favor of R. Mehdiyev and no one is against.

Academician Ramiz Mehdiyev was elected new president of ANAS according to the results of the voting.