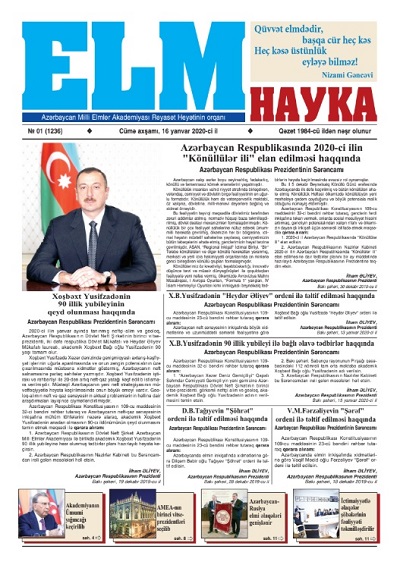 The next edition of the newspaper “Elm” of the Presidium of ANAS was published.

On the first page of the newspaper were reflected the orders of President Ilham Aliyev “On declaring 2020 “Year of Volunteers ” in the Republic of Azerbaijan”, “On the celebration of the 90th anniversary of Khoshbakht Yusifzadeh”, “On awarding Khoshbakht Yusifzadeh with the order “Heydar Aliyev”, “On Additional measures in connection with the 90th anniversary of Kh. B. Yusifzadeh", "On awarding D.B. Taghiyev the Order of "Shohrat" and "On awarding V.M. Farzaliyev of the Order of" Sharaf ".

The second page of the printed organ provides detailed information on the 93th, 94th and 95th volumes of the multi-volume publication “Ilham Aliyev. Development is our goal”, the book dubbed “Thoughts on the problems of social sciences and humanities, and airspace ” by the President of ANAS academician Ramiz Mehdiyev, published in Azerbaijani and Russian.

In addition, the obituary signed by the head of state dedicated to academician Bahadir Taghiyev, the farewell ceremony with the late academician, as well as the book “The Leader Adapting the Development of Azerbaijan to the Challenges of the 21st Century” by academician Ramiz Mehdiyev and the meeting of the President of ANAS with representatives of the agency of “Clarivate Analytics”, were reflected on the third page.

On the 4-8 pages of the newspaper you can find articles about the General Meeting of ANAS held on December 28, speeches by current and corresponding members at this event, decisions made, approval of the new composition of the Presidium, including the Statutory Commission of the Academy, as well as the election of the first vice presidents of ANAS.

Reader’s meetings include ANAS Presidium meetings, academician Ramiz Mehdiyev’s meetings with scientists and specialists from the University of Strasbourg and the High Technology Park, a conference on the results of the Nasimi Year at the Academy, and the book Literature, Time and Modernity by acad. I. Habibbayli, First Vice President of ANAS, which was published in Moscow, annual report of the Departments of Public Relations of scientific institutions and organizations of ANAS.

The newspaper, consisting of 20 pages, also contains materials in Russian.

Note that editor-in-chief of the “Elm” newspaper, published since 1984, is the head of the Department of Public Relations, Press and Information, Ph.D. in Philology, Aghahuseyn Shukurov.