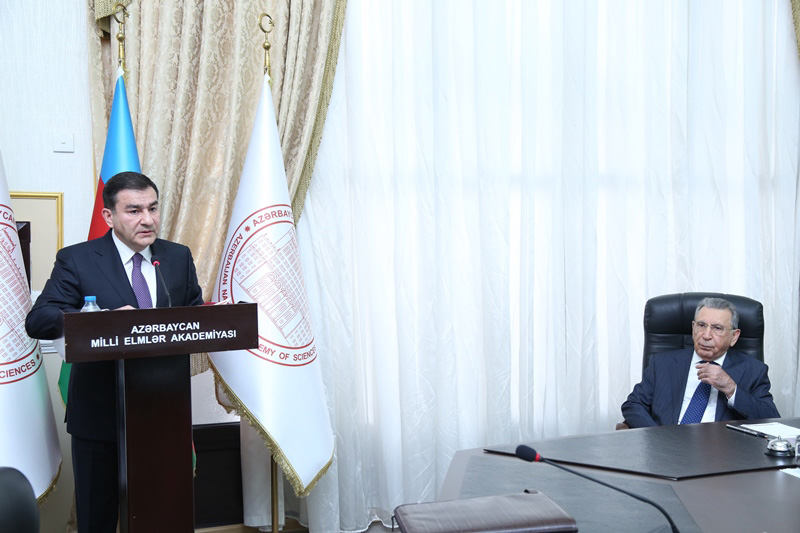 ANAS held a meeting with the chairman of the Higher Attestation Commission Famil Mustafayev
20.02.2020

ANAS has hosted for a meeting with the chairman of the Higher Attestation Commission under the President of the Republic of Azerbaijan Famil Mustafayev.

The meeting was attended by the leadership of the Academy, the chairmen and scientific secretaries of the Councils for the defense of dissertations for the degree of Doctors of Philosophy and Doctors of Sciences operating in scientific institutions and organizations of ANAS.

Opening the event, President of ANAS academician Ramiz Mehdiyev noted that recently, the Academy has been organizing meetings with heads of state structures aimed at enhancing the role of ANAS in the creative process carried out by President Ilham Aliyev. Speaking about the activities of the new leadership of the Higher Attestation Commission, academician Ramiz Mehdiyev spoke about the orders of the head of state aimed at improving the work of the commission and increasing its credibility, and about the innovations introduced in this area.

Noting that all the activities carried out in the commission, of which he is the chairman, are implemented under the guidance and with the maximum support of the President of the Republic of Azerbaijan, Famil Mustafayev noted that during his leadership about 2500 scientific papers were reviewed, procedural rules and regulatory documents were updated and mechanisms, defects fixed. Speaking about the process of awarding academic degrees and conferring academic ranks, the chairman of the commission spoke in detail about the updated regulatory documents, the amended rules and introduced innovations, periodical scientific publications. Speaking about the "Regulation on the rules for awarding academic degrees", approved by the Decree of the Head of State dated June 11, 2019, Famil Mustafayev said that the practice of awarding academic degrees in Russia, Belarus, Kazakhstan, Ukraine, as well as a number of European countries was taken into account when compiling the document.

Stressing that the requirements related to the publication of articles, participation in conferences, congresses and symposia have been simplified, Famil Mustafayev spoke about new rules for preparing dissertations, their volumes, terms for submission to defense, rules for voting in dissertation councils, rules for drawing up abstracts that are sent abroad scientific seminars, the rules that apply when plagiarism is detected, etc.

Then the chairman of the Higher Attestation Commission responded the questions from ANAS employees, chairmen and scientific secretaries of dissertation councils, extensive discussions.

In conclusion, academician Ramiz Mehdiyev thanked Famil Mustafayev on behalf of ANAS employees for his participation in the meeting and expressed confidence that the issues discussed during the event would have a positive impact on the development of scientific potential in the republic.