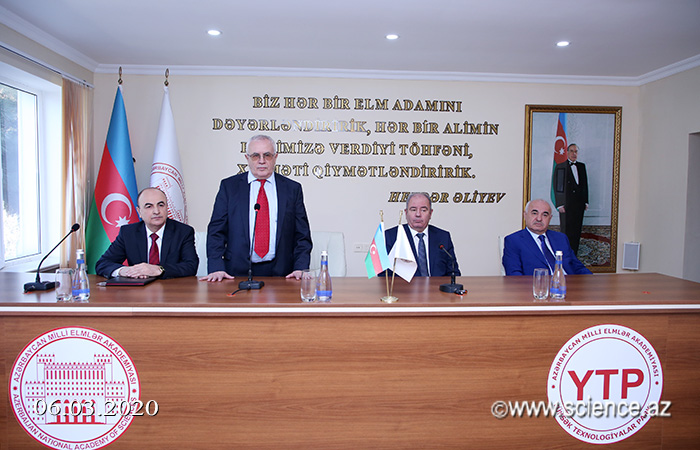 Academician Ali Abbasov was appointed director of the High Technologies Park of ANAS
11.03.2020

Speaking at the event, ANAS academician-secretary, corresponding member Aminaga Sadigov introduced the team of academician Ali Abbasov and spoke about the scientist's scientific, scientific, organizational, socio-political and pedagogical activities. He expressed confidence that academician Ali Abbasov will achieve the expansion of the Park thanks to his rich scientific and managerial experience, make a significant contribution to the development of this scientific institution and wish him success.

Aminaga Sadigov said that recently, scientific and innovative activities have played an important role in the socio-economic development of many countries of the world. According to him, the activity of the VT Park is one of the main priorities of the Academy of Sciences, and the Presidium of ANAS is ready to support all the initiatives of the management and employees of this organization on scientific and innovative activities.

Further, in his speech, the first vice-president of ANAS, academician Ibrahim Guliyev noted that significant work has been done in the HT Park over the past period. He noted the beginning of a new stage in the organization’s activities and expressed confidence that under the leadership of Academician A. Abbasov, work in this direction will continue at a high level. Academician Ibrahim Guliyev brought to attention that the model of innovative development in Azerbaijan is one of the priority areas of state policy. In the face of multifaceted reforms in the field of scientific activity, VT Park faces a number of important tasks. He wished academician Ali Abbasov success in fulfilling these duties.

Speaking at the event, Academician Ali Abbasov thanked the President of ANAS Ramiz Mehdiyev and the Presidium of the Academy of Sciences for the new appointment. According to the scientist, recently in our country measures have been taken to develop the innovative sector of the economy, which is one of the priority areas of the socio-economic sphere. He said that HT Park, as a structure implementing innovative projects, will support government policy in this area. He noted that the Park, whose goal is to produce competitive products based on scientific results, will continue to take all necessary measures to ensure sustainable development of the Azerbaijani economy.

Then Professor Elton Mammadov spoke about the personal qualities of A. Abbasov, his managerial experience, his merits in the development of statehood, as well as teaching activities and wished him success in his activities.