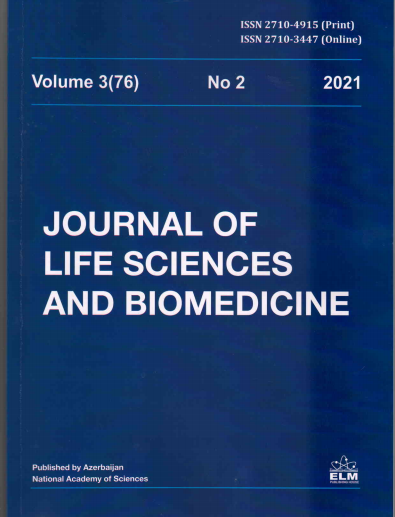 A new issue of the journal “Life Sciences and Biomedicine” has been published
29.12.2021

This issue of the journal includes scientific articles written on the basis of online conference lectures on “Karabakh’s biodiversity, land and water resources: past, present and future” held in accordance with the decision of the Presidium of ANAS No. 2/4 dated January 12, 2021 “On the Action Program and Action Plan on the tasks of ANAS in connection with the scientific research work on the liberated territories of Azerbaijan”.

Deputy Editor-in-Chief of the journal, Vice-President of ANAS, academician IradaHuseynova noted in the “Foreword” that during the 44-day war, under the leadership of President of the Republic of Azerbaijan, Victorious Commander-in-Chief of the Armed Forces IlhamAliyev, as a result of the liberation of our sacred lands from Armenian occupation, along with the restoration of historical justice, there was a historic chance for science to return to Karabakh.

It is known that the Karabakh region has always been distinguished by its human resources, climate, landscape, flora and fauna diversity, fertile lands and healing waters. Before the occupation, there were many rare species of plants and animals included in the “Red Book” of Azerbaijan, including reserves and sanctuaries. For nearly 30 years, it has not been possible to conduct any scientific work on this valuable variety. Therefore, most of the articles are based on past research, satellite imagery, initial visits of our scientists to the region, forecasts. However, it is noteworthy that some articles reflect the results of real monitoring conducted in the region over the past year.

In general, there is no doubt that the 20 articles included in this issue of the journal, which will serve as a basis for future research in the region, will be received with interest by the scientific community and the wider readership.