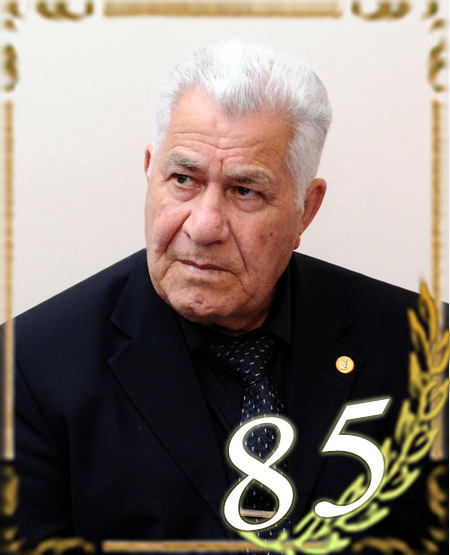 Today, academician Maharram Babayev, a well-known soil scientist, Order of the Badge of Honor, head of the Laboratory of Soil Genesis, Geography and Cartography of the Institute of Soil Science and Agrochemistry of ANAS, turns 85.

Maharram Pirverdioglu Babayev was born on January 13, 1937 in Barda. In 1961 he graduated from the Faculty of Agronomy of the Azerbaijan Agricultural Institute.

Maharram Babayev defended his PhD in Soil Science in 1967 (Baku) and doctoral dissertation in 1981 (Moscow).In 2001 he became a professor. He was elected a corresponding member of ANAS in 2001, a full member in 2014.

The scientist was the chairman of the Dissertation Council operating at the Institute of Soil Science and Agrochemistry (2001-2008, 2011-2014), the chairman of the Expert Commission on Biological and Agricultural Sciences of the Higher Attestation Commission under the President of the Republic of Azerbaijan (2009-2011).

Academician Maharram Babayev’s scientific activity covers the genesis of Azerbaijan lands, evolution, national and international classification, nomenclature, system of taxa, geographical distribution, mapping, land degradation, their restoration and efficient use in agriculture, creation of land-geographical information base. He is one of the authors of the land map published in Azerbaijani and Russian languages (Moscow, 1991, scale 1: 600 000), the State Land Map of the Republic (1987, scale 1: 100 000).

Academician Maharram Babayev is the author of more than 300 scientific works, including 9 monographs, 15 books, 14 recommendations, 11 patents and 5 maps. Under his scientific guidance and supervision, 18 doctors of philosophy and 4 doctors of sciences have been trained.

We congratulate academician Maharram Babayev on his glorious jubilee and wish him good health, long life and greater success in his scientific activity.