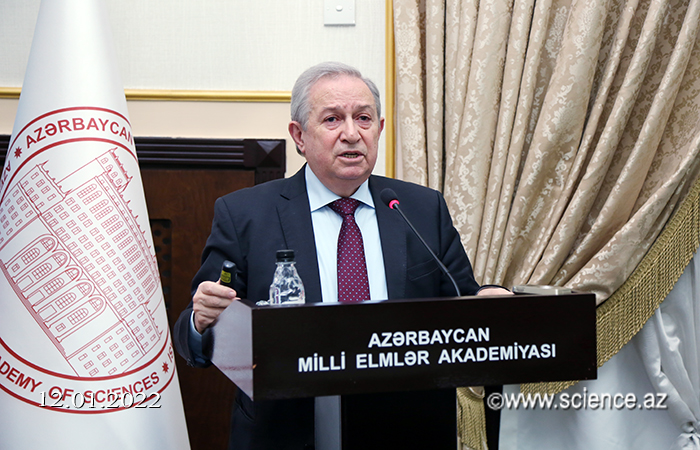 The Department of Chemical Sciences of ANAS made report on scientific and scientific-organizational activities for 2021
13.01.2022

The report on scientific and scientific-organizational activity of the Department of Chemical Sciences of the Academy for 2021 was heard at the next meeting of the Presidium of ANAS on January 12.

Presenting the report, Vice-President of ANAS, Chairman of the Scientific Council of the department, academician Dilgam Tagiyev noted that scientific research in the institutes of the department in 2021 were carried out in accordance with the “Priority directions of scientific-research works to be carried out in the Republic of Azerbaijan in 2021-2025” approved by the Presidium of ANAS.

Within the funds allocated to the Institute of Catalysis and Inorganic Chemistry of ANAS named after academician M.Nagiyev to finance projects included in the “Action Plan for 2020-2022 to ensure efficient use of water resources” approved by the Order of the President of the Republic of Azerbaijan dated July 18, 2020,researches were conducted to study the corrosion condition of metal equipment of Bahramtepe water junction and Mugan hydroelectric power station on Araz river in 2021 and to make some physical and chemical measurements. The report on the work done was submitted to the Ministry of Economy.

The following works were carried out in connection with the implementation of the decision of the General Meeting of ANAS dated May 27, 2021:

In the reporting year, research on 42 topics and 118 cases covering 12 problems was conducted in the institutes of the department, 66 works were completed.

The results of the scientific work of the Institute’s staff are reflected in the materials of a number of international conferences, congresses and symposiums held in the country and abroad.

At the end of the report, the speaker spoke about the existing problems and the tasks ahead in the near future.

After hearing the report, extensive discussions were held around the speech, the report was adopted by the Presidium of ANAS and relevant recommendations were given.