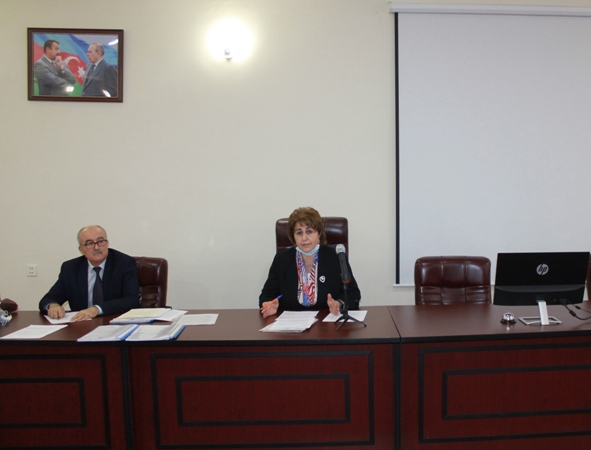 The meeting of the Scientific Council of the Division of Biological and Medical Sciences (DBMS) of ANAS was held
25.02.2022

A meeting of the Academic Council of the Department of Biological and Medical Sciences (BMS) of ANAS was held.

Opening the meeting, the vice-President of ANAS, Chairman of the Academic Council of the Department, Academician Irada Huseynova introduced the participants to the current issues. The academician spoke about the decision of the Presidium of ANAS dated February 2, 2022 "On the Action Plan of ANAS to declare 2022 "Year of Shusha" in the Republic of Azerbaijan". Academician Irada Huseynova drew attention to the responsibilities of the Division of Biological and Medical Sciences in connection with the implementation of this decision, stressed the importance of mobilizing all forces.

Among other measures envisaged in the decision was the organization of an exhibition and seminar on plant diversity of the Shusha region and surrounding areas, which are rare and endangered species and included in the "Red Book" of Azerbaijan.

Then the speaker informed the participants about the work done, scientific research, meetings of relevant working groups held in recent days on the preparation of the third edition of the Red Book. Academician Irada Huseynova also noted that intensive consultations were held with the leadership, employees and specialists of the Ministry of Ecology and Natural Resources of the Republic of Azerbaijan on the 3rd edition of the Red Book.

At the meeting, the new members of the Scientific Councils of the Institutes of Botany and Dendrology of ANAS were discussed and a decision was made to raise the issue before the Presidium of ANAS for their approval.

At the same time, a decision was made to make changes to the research plan of the Institute of Botany for 2022.

The head of the Laboratory of Cell Membrane Systems of the Institute of Molecular Biology and Biotechnologies of ANAS, Doctor of Biological Sciences, Professor Saftar Suleymanov (in connection with his 70th anniversary) and the Director General of the Institute of Botany, Doctor of Biological Sciences, Professor Sayyara Ibadullayeva (in connection with her 65th anniversary) were awarded They were awarded with Honorary Decrees of DBMS.

In conclusion, a number of other issues related to the activities of the Division of Biological and Medical Sciences were considered and appropriate decisions were made.