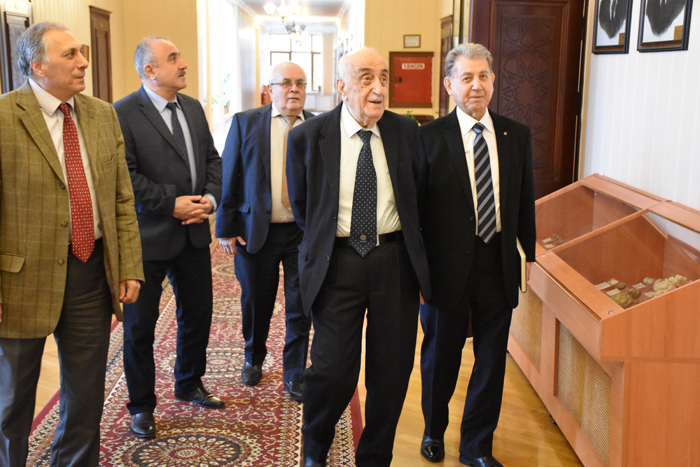 90th anniversary of academician Khoshbakht Yusifzadeh celebrated at the Institute of Geology and Geophysics
21.01.2020

Institute of Geology and Geophysics of ANAS held an enlarged meeting of the Scientific Council dedicated to the 90th anniversary of prominent oil scientist and geologist, First Vice President of the State Oil Company of Azerbaijan Republic, Academician Khoshbakht Yusifzadeh.

Opening the event, director of the IGG, academician Akif Alizadeh opened the event and provided detailed information about the activities of the prominent scientist. He said that Yusifzadeh made an important contribution to the development of Azerbaijan's oil industry. He was right about the actual amount of oil reserves in Azerbaijan before the "Century Contract" was concluded, and was able to attract foreign investors' attention, as well as take an active part in the exploration and commissioning of more than 20 oil and gas fields.

Later, head of the Institute, Professor Adil Aliyev delivered a lecture of Kh.Yusifzade’s life and scientific-production activity. It was stated that Khoshbakht muallim is a living legend who writes brilliant pages to the oil chronicles of Azerbaijan.

At the event, IGG employees congratulated the geologist on the 90th anniversary and wished him robust health and success in his work. He spoke about the great support, respect and care of the great leader Heydar Aliyev and his worthy successor President Ilham Aliyev.

The program of research activities on the priority directions for 2020-2025 was also discussed at the meeting.

©All rights are reserved. Citing to www.science.gov.az is necessary upon using news.